Who is paying for the coffee of the future?

The coffee sector is in danger, NGO’s argued at the Coffee debate last week: while lots of money is made by coffee brands who invest in new marketing concepts to seduce consumers, investments in production of coffee by farmers is lacking. Demand is increasing, but climate change threatens production. Representatives of industry, however, seemed not to be too alarmed. The debate concluded with consensus among many that sector wide cooperation to redistribute value in the coffee chain is missing and urgently needs more action.

The evening before the World of Coffee event in Amsterdam, representatives of coffee brands, coffee traders, banks, civil society and farmer cooperatives gathered in the Nieuwe Poort in the business centre of Amsterdam to discuss the future of coffee. The debate was organised by Solidaridad, Rainforest Alliance, Rabobank, and Vice Versa. In between the discussions, a short movie was shown depicting a future without coffee, in which desperate office clerks run for the very last sip of coffee.

That the future of coffee is insecure was indeed the message of Heske Verburg, managing director of Solidaridad Europe, who opened the evening. She told that demand for coffee is expected to double by 2050. However, due to climate change up to 50% of the current coffee producing area will no longer be suitable for coffee production by 2050, if no additional measures are taken. Moreover, in many countries the average age of coffee farmers is around 60 years. Young farmers do not want to grow coffee anymore, because they can’t make a living with it. ‘How can we redistribute value in the coffee chain’, she asked. ‘Who is paying for the coffee of the future?’ We all should, she said, and more than we currently do. ‘We need more commitments from the coffee industry and the financial sector to invest in the future of coffee. The external costs are borne now by the farmers and that is not sustainable. The coffee sector is built on quicksand’, Verburg concluded.

That is also the conclusion of the Coffee Barometer 2018, that was recently published. Sjoerd Panhuijsen, Knowledge officer at HIVOS and lead-author of the Barometer, said that ‘coffee production worldwide is growing and the global coffee industry is consolidating’. Leading roasters, such as Nestlé and Jacobs Douwe Egberts, are investing billions in coffee company acquisitions and mergers. Also, production concentrates in a fewer countries. ‘The top five countries now produce 75% of coffee. That concentration means risky business when we look at the impact climate change can have. Where will the coffee of the future be grown?’ There was much praise among the audience for the Coffee Barometer. Britta Wyss Bisang, of Rainforest Alliance: ‘As the coffee industry, we need this kind of push and its publication should be continued.’

Less than 10% for producing countries
Distribution of value is not equal along the chain, Panhuijsen said. The sale of coffee globally has a value of 200 billion dollars each year. Most of that money stays with coffee retailers such as Starbucks and McDonalds, or with the large coffee brands and roasters such as Nestlé and JAB, the holding that owns Douwe Egberts and many other brands. Less than 10% of that value stays in the producing countries. Of that 10%, some goes in taxes to producer country governments, some to exporters, and some of it to the farmers that produce the green coffee. While global demand for coffee increased in the past decades, that is not reflected in the price farmers get. The price has been decreasing over the years. Coffee farmers often operate at a loss and can’t make a living out of coffee. Investments to make the sector more sustainable are limited, as the Coffee Barometer made clear. 350 million dollars are invested worldwide in sustainability efforts, such as training farmers to enable larger yields. That 350 million dollars is close to zero percent (in fact: 0,17%) of the money that is made worldwide in the coffee sector, Heske Verburg said.

Another issue raised by Panhuijsen is the lack of transparency in the coffee chain. ‘Since the 80’s the number of 25 million is circulating as an estimate of how many small scale coffee farmers are producing our coffee. But it could as well be 12 million. The truth is, we have no idea.’ The lack of transparency, especially on the costs that farmers have to make to produce coffee, was signalled by many in the debate as a hindrance in making the sector more sustainable. Lonneke van Genugten, of the Dutch NGO Fairfood, asked for ‘disruptive ideas of bright young people’ to fix this problem. Fairfood sets an example and uses blockchain for 100% traceable coffee. She believes blockchain technology can help to make clear who earns what in the coffee chain.

Yet traders don’t have much space to manoeuvre, said Michel Germanes, Managing Director of EFICO GROUP, a coffee trader. ‘Margins are only 1 to 2 percent, and the market is low. We do what we can to support sustainability with our foundation and projects, but we are only a small player.’

Productivity
The same cannot be said of Jacobs Douwe Egberts (owned by JAB holding), the large coffee roaster that was represented by Daniel Martz, Director Global Corporate Affairs, Communications and Sustainability. ‘Our company is indeed getting bigger’, he said as he confirmed the outcomes of the Coffee Barometer, but that is not the problem.. The real problem is that most coffee producers have largely missed the green revolution and have very low yields. There are many smallholders, and some do well. But many small scale farmers in Africa are in fact subsistence farmers. They need to be helped to increase their production.’ JDE is doing its share, Martz said. ‘We invest in 8 countries in 30 projects to double yields and income of farmers.’

From the audience, Ruerd Ruben of Wageningen Economic Research commented on Twitter that productivity is indeed a problem. ‘Old farmers, aged trees and poor inputs: actual coffee yields are only one-tenth of potential production’, Ruben wrote, and added that more attention is needed for the supply of inputs like fertiliser and better trees: ‘Coffee sustainability starts with better input use and pre-finance from traders and processors.’

Enough funding
Martz agreed with others in the debate that more investment in sustainability is needed. ‘But it is not always easy to know where to invest and how to direct that investment to the right farmers.’ That was also the message, later in the evening, of Esther Berkelaar, Head Trade and Commodity Finance Agri Europe at Rabobank. ‘For sound propositions, sufficient funds can be found. That can be private funds, or a combination of government funding with the private sector. But such sound propositions are not popping up with the speed of sound.’ Investments in sustainability programs can be risky, she added. ‘Harvests can fail or farmers may not be able to pick up the right practices of extension programs.’ Impact investment of philanthropists is a growing field, she said, but later added again: ‘It is not always easy to find a destination for that money.’ However, Berkelaar concluded that enough funding for sustainability is available to safeguard the future of coffee.

Most optimistic was Hidde Eikelboom, CEO and Head of Coffee Platform in Vietnam at the Louis Dreyfus Company. ‘Coffee farmers in Brazil and Vietnam have a good income. They make 4 to 5 times more money than a factory worker in a Samsung factory.’ The problem is that some farmers have a very small area to farm, only 1 or 1,5 hectares, he added. ‘That is not enough to feed six children.’

Lack of cooperation
Others were not so optimistic. ‘Many farmers are starving’, Juan Esteban Orduz said. He is a member of the Rainforest Alliance Board of Directors and CEO and President of the National Federation of Coffee Growers of Colombia. Since the 80’s, the prices that farmers get for their coffee are decreasing, Esteban Orduz told the audience, and so is the purchasing capacity of farmers. On the other hand, costs to buy seedlings and fertiliser are most likely increasing. The problem is lack of cooperation in the sector, Esteban Orduz said. ‘We have not been seriously sitting down to solve the problem.’

Many agreed that much more cooperation in the sector is needed. Marcelo Burity, Head of Green Coffee Development at Nestlé, one of the largest coffee companies in the world, said that sustainability programmes of companies and NGO’s have a lot of impact, but can’t do enough by themselves. ‘Governments of producer countries need to be involved. They should not invest in the sector themselves, but they should create an enabling sector, for example by re-introducing extension services.’

Standards not the answer
Roberto Lopez, Sustainability Manager at the farmers’ cooperative COAGRICSAL in Honduras, said that for coffee to be sustainable, the issues that farmers face should be solved. ‘Large coffee companies seem to focus on nice coffee outlets for consumers. But if the farmer is overlooked, it will go wrong some time.’ Sustainability standards or certificates, such as Fairtrade, UTZ or Rainforest Alliance, are not always an answer, he said. ‘To get a certificate, you have to invest a lot of money, and it is a long term investment. Most farmers don’t do it.’

‘It is very good that the private sector is investing in projects that promote sustainable coffee’, said John Schluter. ‘But it is only 350 million which is a tiny portion of the 200 billion that is made in the sector. We need a different approach.’ Schluter is co-treasurer at the NGO Café Africa and one of the board members of the Global Coffee Platform, of which all the leading companies are a member, as well as representatives of producers, traders, and NGO’s. It is supported, among others, by the Dutch sustainable trade initiative IDH. Schluter argued that a fairer price for farmers ‘should one way or the other be built into the price that consumers pay for coffee, instead of just focussing on Corporate Social Responsibility projects.’ While there was a lot of consensus in the room on this suggestion, it is less clear how to achieve it. Schluter suggested a general premium for farmers that all roasters and traders agree on. Juan Esteban Orduz, who is also a board member of the Global Coffee Platform, also asked for a minimum price for farmers. ‘What we need is more ambition in the whole chain to cooperate and sit down for serious action, facing the situation as it is.’

Growth
Trader Michel Germanes of EFICO GROUP agreed that a minimum price would be good, and suggested that a tax levied by importing country governments could be possible. Other representatives of industry were less willing to accept that. Daniel Martz of Jacobs Douwe Egberts: ‘I wonder if the revenues of a Dutch tax on coffee import will ever reach the farmers, I think it will end up in the treasury of the Dutch government.’ The Dutch government does more than its share in making coffee more sustainable, he added, by financing the sustainable trade initiative IDH. ‘Other governments need to step up.’

Martz said he didn’t believe in a minimum price, and opted for a different solution. ‘We need to grow the category’, he said, talking jargon for increasing the sale of coffee. ‘The more people are drinking coffee, the better it is for farmers.’ That was the same line of reasoning as Marcelo Burity of Nestlé. ‘We are sharing the concerns about issues in the coffee sector, as raised in the Coffee Barometer. Especially about climate change. But it helps to stay hopeful. It is a healthy sector and there is growth in production. The way forward is to increase productivity, which will increase incomes for farmers.’ 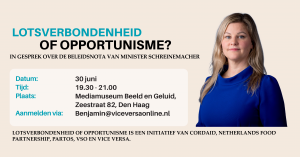