How can the Netherlands contribute to improving nutrition in Africa in the coming decade? Retiring Professor Ruerd Ruben would like to see Dutch government policy informed by a food systems approach – with more focus on consumers, and an active role for Dutch embassies entering into policy dialogue with the government in their African host countries. Minister for Foreign Trade and Development Cooperation Sigrid Kaag agrees: ‘The systems approach, where more priority is given to the environment and consumers, is now widespread. It will be high on the agenda of the UN summit in 2021.’

The next general election in the Netherlands will take place in March 2021. What should the new minister responsible for Development Cooperation change in the country’s current food security policy?

In Ruerd Ruben’s view, the minister should have a higher budget at her disposal, back at the 0.7% of GDP that the Netherlands used to reserve for development cooperation. ‘The total amount of development assistance worldwide is USD 153 billion, 0.3% of global GDP. According to calculations made by the International Food Policy Research Institute, if that amount were doubled we could put an end to hunger by 2030.’ There is even more reason to do this now, says Ruben, as the Covid-19 pandemic is causing a dramatic increase in poverty.

But how should that money be spent when it comes to food security and food systems? In his response, Ruben draws on the farewell lecture he gave on November 5 on his retirement as professor at Wageningen University and research coordinator at Wageningen Economic Research. Throughout his 40-year career, Ruben has been involved in research and policymaking on food security, and has held a range of positions including director of the Evaluation Department (IOB) at the Ministry of Foreign Affairs and director of the Centre for International Development Issues (CIDIN) at Radboud University Nijmegen.

Many interventions, whether they take the form of development assistance projects or investment by companies, assume that there is a simple, straightforward relationship between the intervention and the desired outcome. But reality is nearly always more complex, says Ruben. For example, increasing food production does not always automatically lead to better nutrition, as extra income usually ends up in the male farmer’s pocket and does not always reach the woman who buys and cooks food. Likewise, farmers do not always decide to use fertiliser and improved seed varieties when seeking to increase their yields per hectare, because this involves increased risk. Many farmers choose to avoid risk aversion rather than take steps to increase the productivity of their land.

To design better interventions and make more effective policies, Ruben concludes, we need a better understanding of food systems and how different actors and drivers interact in those systems. ‘The essence of food systems thinking is that it does not simply look for solutions to a problem (fixing the problem), rather it aims to address the root causes of the problem. And these are usually found outside the arena where the problem occurs.’

Ruben’s recommendation for making a robust policy based on a food systems approach is to focus much more on the people who ultimately buy and eat the food: the consumers. ‘Most of the hungry these days are people living in cities, not in the countryside. We need to find out why they can’t afford to or don’t eat healthy food, and base policy on that.’ The Dutch government’s current policy focuses too much on food production. We promote public-private partnerships centred around increasing food supply. ‘But research has shown that this often only has a limited effect on reducing malnutrition among the most food insecure.’

This was the conclusion drawn in the IOB evaluation of Dutch food security policy done in 2018, when Ruben was still director. Since then, there have been some changes. Embassies have started to focus more on sectors producing food that enhances nutrition, such as horticulture, dairy and aquaculture, Ruben continues. ‘Which is a good thing. But more attention still needs to be paid to the demand side of the food system.’ Meaning the ability of poor consumers to buy healthy food. One way to address this is to give people the money or other means to access food, he explains. ‘This can be done through social safety nets and cash transfers aimed at food insecure people, such as poor women. Or through school feeding programmes.’ Social safety programmes have been successful in Ethiopia. ‘They are very effective, and they need little administration.’

Ruben is critical of the ‘Holland branding’ (meaning putting a Dutch flag on projects or funds), being done in programmes that focus on increasing agricultural production in partnership with the Dutch private sector. Examples include dairy programmes with FrieslandCampina and horticulture programmes with Dutch seed companies such as Rijk Zwaan or East West Seeds. ‘There is nothing wrong with producing more and better. But this alone is not necessarily going to get more healthier food to consumers.’ And, he adds, most employment and more than 80% of value-added creation takes place beyond the farm gate: in processing, packaging and transporting food along the value chain. ‘This midstream segment, where many small and medium enterprises are involved, is critical for economic growth.’

To create healthy, sustainable growth requires a coordinated combination of activities. Apart from projects for increasing and improving agricultural production, work also needs to be done on the demand side, says Ruben. ‘For example, projects on home delivery of affordable, healthy vegetables.’ Empowering women to have a bigger say in how household income is spent, can also have a big impact on food security. ‘This kind of work is usually better done by NGOs than by companies.’

Third on the list, according to Ruben, should be stronger policies on the part of African governments to ensure that food prices are low enough for consumers to be able to afford them. ‘Here Dutch embassies can take the lead by facilitating policy dialogue and ensuring coherence and coordination.’

In Ruben’s view, to make policy more ‘food systems wise’ policymakers in the Ministry of Foreign Affairs should make more effort to learn what their colleagues in other departments are doing. Compartmentalisation needs to be countered. For example, food security falls under the department of Inclusive Green Growth (IGG), while gender, drinking water and healthcare, all of which are closely linked to food security, fall under the department of Social Development (DSO). ‘That is most unfortunate. These should merge together, or at least work under the same budget.’

Furthermore, it would be good if regional markets and trade received more support, rather than international value chains, says Ruben. ‘The 2SCALE programme, which the Netherlands has been funding for a long time and calls itself the largest incubator for inclusive agribusiness in Africa, has done a lot of good work on this.’ The African Development Bank takes the same approach. ‘This enables surpluses within the African market to be better balanced.’

Finally, policy focuses too much on rural areas, whereas most of the hungry now live in cities. ‘Cities deserve a much more focused and smart approach, working with tailor-made approaches at the neighbourhood level.’ To do this we have to engage with new partners – instead of the ministry of agriculture, it’s time to work with garbage collection services or neighbourhood committees. 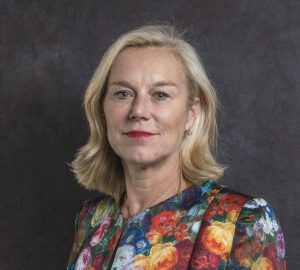 Sigrid Kaag, minister for Foreign Trade and Development Cooperation gives a written response. ‘Wageningen University & Research is an important knowledge partner for agriculture and food security, and Professor Ruben occupies a special position here thanks to his long track record, which includes his time as the director of The Policy and Operations Evaluation Department (IOB) at the Ministry of Foreign Affairs. I am therefore pleased that he has once again drawn our attention to this global problem in his farewell speech. A number of points raised by Professor Ruben can be seen in the current efforts of the Cabinet. The systems approach, where more priority is given to the environment and consumers, is becoming more widespread. Steps have also been taken in other projects in the field of climate and nutrition. It is also good news that food systems will be high on the agenda of the UN summit in 2021 and we will be looking globally at how the environment, agriculture and diets are linked. The Netherlands is doing its utmost in this respect: in terms of finance, personnel and through our network.’

‘While much has improved in recent years, I agree with Professor Ruben that we still have a way to go. An ongoing dialogue with knowledge partners, civil society and companies on how the Netherlands can best contribute to global food security is important, and will remain so. I am counting on Professor Ruben to continue to take part in these debates even after his retirement and to keep us on our toes.’

Professor Ruben is one of the panelists at the Global Virtual Seminar about The Afrian Food & Employment Revolution by 2030. Register for free at https://bit.ly/3ldPHXt 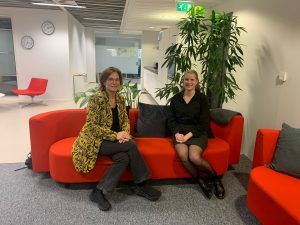 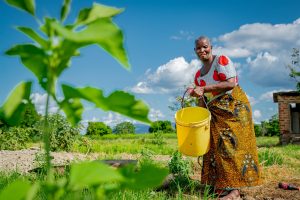