Uganda: no respect for human rights, no sectoral support

How can the Dutch government explain to Dutch taxpayers, and the Ugandan people, that it provides financial support to a regime that uses excessive violence against its own population? And for how long will it continue doing so? An opinion article by Ugandan Amaanyi Grace.

On 4 February 2021, the International Criminal Court (ICC) in The Hague, the Netherlands, declared Dominic Ongwen guilty of war crimes and crimes against humanity. Until his surrender in 2005, Ongwen served as a commander in the Lord’s Resistance Army (LRA), a rebel army that came into being in Northern Uganda in 1987.

The verdict against Ongwen makes me feel uncomfortable and not because I am downplaying the untold suffering he caused. Yes, he has committed heinous crimes for which he has been convicted. However, why is a former rebel commander being persecuted on the world stage of international justice and President Yoweri Kaguta Museveni, who has ruled Uganda with an iron fist since 1986, is not?

This makes the trial against Ongwen look quite arbitrary.

This arbitrariness can be traced back to geopolitics. Museveni is making himself indispensable to the international community in various ways.  Uganda has been the main troop supplier to the African Union Mission in Somalia (AMISOM) for many years. According to the AMISOM website, the number of Ugandan AMISOM soldiers ranges from between 5,000 to 6,223. The United States (US) in particular are grateful to Museveni for engaging his soldiers against Al Shabaab – a jihadist group sowing death and destruction. Since an American commando action in Mogadishu in 1993 turned into a fiasco, with American corpses being dragged through the streets, the US are shivering at the idea of sending ground troops to Somalia.

In addition to providing troops to AMISOM, Uganda is hosting numerous refugees from the region, mainly from South Sudan and the Democratic Republic of Congo. According to the Ugandan authorities and the United Nations High Commissioner for Refugees (UNHCR), Uganda was home to more than 1.4 million refugees as of 31st January 2021. In short, a criminal trial against Museveni will have a higher ‘risk’ for the international community than the prosecution of a former rebel leader who once terrorized the periphery of Uganda.

Patent on use of child soldiers

However, that does not change anything about the irrefutable fact that Museveni has blood on his hands. It started when he waged a guerrilla war from 1981 to 1986 in order to capture state power. He deployed countless child soldiers, so-called kadogos (‘little ones’), into battle as cheap cannon fodder. That says enough about Museveni’s moral compass. It is painful for him to admit it, but in Uganda it is him, not the LRA, that patents the phenomenon of child soldiering. 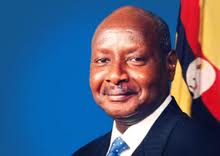 Museveni has been ruling Uganda with an iron fist ever since 1986, making him one of Africa’s longest ruling presidents.

After Museveni’s takeover in 1986, Northern and Eastern Uganda became scenes of armed uprisings against his rule, including the insurrection of the LRA. When fighting these insurgent movements, Museveni’s government soldiers made little to no distinction between civilians and rebels.

In 1989, more than 47 civilians were suffocated to death in a train carriage in Mukura, Eastern Uganda while in 1991, four civilians were buried alive in Burcoro, Northern Uganda. Just two examples of the many excesses that have taken place under Museveni’s moral responsibility as Commander-in-Chief of the Ugandan armed forces.

We do not even have to go that far into the past to understand what Museveni is capable of. In September 2009, when tensions between Buganda, a kingdom in Central Uganda, and the central government ran high, the security apparatus resorted to excessive force. According to Human Rights Watch (HRW), at least forty people were killed. In November 2016, a conflict between Rwenzururu, a kingdom in Western Uganda, and the central government got completely out of control, with the Ugandan military and police killing over one-hundred civilians, according to HRW. So far, no one has been held responsible for both instances of excessive state violence.

In January 2021, elections were held in Uganda. In the run-up to these elections, Museveni’s regime once again showed its true colors. In November 2020, Ugandan authorities arrested opposition leader Robert Kyagulanyi Ssentamu, also known by his stage name ‘Bobi Wine’, stating his political rallies violated the corona measures. However, incumbent President Museveni was allowed to hold similar rallies which managed to pull large crowds of supporters, undisturbed.

Tormented by yet another example of government repression, supporters of Kyagulanyi took to the streets. The Ugandan authorities mercilessly retaliated and killed 54 people, according to their own statistics. The message was crystal clear: the Museveni regime did not have any respect for human rights and the rule of law whatsoever.

Recalibrate our relationship with Uganda?

Is this accumulation of human rights violations not a reason to recalibrate the relationship with the Museveni regime? For instance, look at the bilateral relationship between the Netherlands and Uganda. The Netherlands have been providing sectoral support to the Ugandan government with other donors for many years. This support ostensibly benefits the Justice Law and Order Sector (JLOS), a sector that includes the judiciary, the police and the prison system.

In providing sectoral support, the donors, including the Netherlands, hope to strengthen the rule of law in Uganda. The website of the Dutch Ministry of Foreign Affairs reports that the aforementioned donors entered into a five-year agreement with the Ugandan government in 2017 for a grant of ten million euros. In 2019, this contribution was increased by yet another seven million euros.

First of all, the question is whether these millions of euros will end up in the right place. Under Museveni’s rule, corruption has spread rampantly across all sections of the Ugandan government. According to the Corruption Perceptions Index (CPI), an authoritative annual corruption ranking, Uganda ranked 142nd out of 180 countries by 2020.

Whether or not sectoral support disappears into the pockets of Museveni’s clientele, is still up for debate, what is clear is that in Uganda the rule of law seems further away than ever before.

How long can the Dutch government justify to its taxpayers its policy of sectoral support to a corrupt regime that violates human rights in order to stay in power? More importantly, how long can the Dutch government explain to marginalized Ugandans that it sees the Museveni regime as a legitimate development partner? Given the geopolitical context, an indictment from the ICC against Museveni is not a realistic possibility, but the Netherlands can nevertheless suspend their sectoral support to Uganda, making a powerful statement against the Museveni regime. No respect for human rights, no sectoral support.

In view of privacy and security considerations, the author writes under a pseudonym. The identity is known to the editors of Vice Versa,