Emmanuel Alie Mansaray recently became a social media sensation in the West African country of Sierra Leone. This is after his invention of a solar-powered engine car was spotted on the streets of Freetown. His innovative solar car hit the headlines not only in his home country, but also internationally, leaving many people amazed by his outstanding creativity. So, who exactly is this young man and what is the force behind his passion for inventions?

Emmanuel Alie Mansaray, a 24 year old Sierra Leonean turned his vision to reality by making a solar-powered car made from trash and scraps that left many in awe. What you may not know is that this is not his first invention. He began his eco-friendly inventions from a very young age. He describes himself as a self-taught engineer, a creative thinker and a renewable energy expert. His inventions are focused on offering solutions to curb the growing rate of pollution in Sierra Leone. It has been rated as the 17th most vulnerable country in the world, when it comes to air pollution. According to him, there is a high risk of contracting incommunicable and respiratory diseases like lung cancer and asthma among others. These are health complications that are often derived from inhaling hazardous fumes emitted by vehicles using fossil fuel.

“At the age of twelve was when I realized I had a special gift, a talent, and that I was born different. Growing up I was more interested in what was hidden in the trash than anything else. I would collect durable items that had been disposed like milk tins, bottles and used batteries. With these I would try building things like cars, contrary to what many children my age did. I tried matching my mates’ talents like singing, dancing and many others but I was very terrible at them. I guess no one person can possess a variety of talents, you can only be really good at one thing,” he said with a giggle. Indeed he is different; he sees trash as treasure since that is where his raw materials come from, and every need is an opportunity for him to offer a solution through critical thinking. “In the community where I reside in, it is very difficult for people to access information. Growing up I realized that we were always lagging behind in knowing what was happening across the country. Even the common radio was hard to come by around here, leave alone a television, and so these people knew very little of what was going on elsewhere. This was the genesis of my creativity as I yearned to come up with my own radio transmitter,” he recalls. 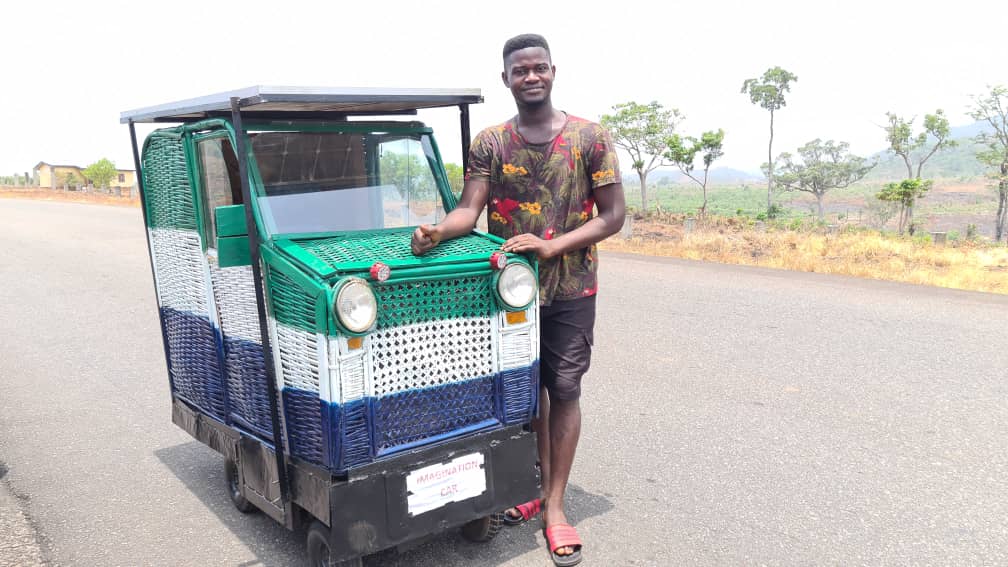 Emmanuel and his solar-powered car made from trash and scraps

Without attending any training whatsoever, and at that tender age, Emmanuel embarked on a mission to come up with his own radio station. “We had a lot of trash littered around, so I would collect what I felt would be useful to me like used batteries and cables. I would bring them home, wash the washables then store them well. Through trial and error I was able to come up with a complete circuit and eventually I had my very own radio station,” he told me. He became the talk of the village after his successful innovation. To his surprise and joy, his radio station was used to sensitize the people in his community about the spread of the Ebola disease which was ravaging Sierra Leone by then. This was a mission accomplished for him.

It is said that necessity is the mother of invention. For him lack of electricity and seeing how students, him included, suffered was saddening and prompted him to act. It was especially worse when they had to work on assignments or study at home after school. “I tried to offer a solution after a comprehensive research. I was in high school at the time, and had come up with a couple of concepts from the little physics knowledge I had. Electricity is one of the greatest problems in Sierra Leone, especially in the rural villages. Lack of access to electricity in households has also contributed to teenage pregnancies and early marriages. This is because some girls get lured easily by boys whose households have electricity, a luxury that many wish to enjoy,” he disappointedly admits. Believe it or not, Emmanuel managed to invent a fuel-free generator. According to him, the generator is meant to be of economic benefit and a blessing to inhabitants in rural and remote communities where poverty is rampant and largely felt. 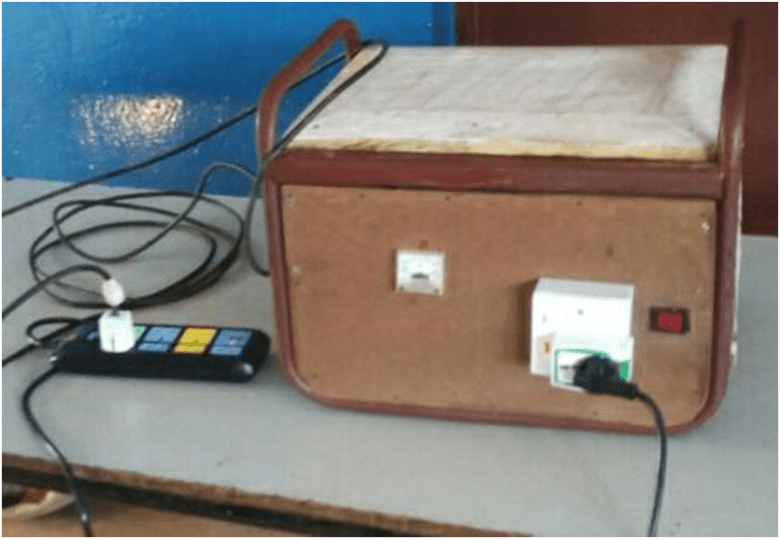 “This generator does not produce smoke or noise. Its main power source is a button and not a crank, because it does not use fuel. With an internal cooling system when powered on, it constantly and efficiently supplies Alternating Current (A/C) as can be desired for days, weeks or even months. The in-built generator is made up of a mixture of waste electrical components, including two rectified diodes, two transformers, two transmitters, two circuit boards, two earths and two switches. It has a life span of six years if the precaution is adhered to by the user,” he asserted, confirmation that indeed he is a renewable energy expert. At the moment, he is in the process of upgrading it.

For Emmanuel, every problem has a solution, a concept that he has taken to heart by offering one to each problem he comes across. If only political leaders would emulate him! “I quickly noticed the hustle that the disabled people were going through whenever I visited the town, being discriminated especially when it came to boarding the public vehicles. Some of these people come from really far and seeing the frustrations written all over their faces, I desired to help.  This pushed me to research even further so as to come up with a solution,” he says. The result of his research was a single-seater solar tricycle. 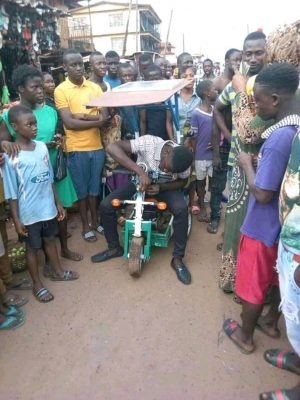 Emmanuel on his solar tricycle

The solar tricycle covers about 50 kilometers per hour. This, he points out, can be of immense importance and benefit to persons with disabilities, considering their challenge of movement and the acute shortage of transportation in Sierra Leone. This solar tricycle does not require peddling, it moves just by the press of a button. He is however disappointed that some people spread negative information and make a mockery of his creativity instead of encouraging and empowering his dreams.

All these series of inventions, including his latest the solar power car, have not been a walk in the park. It took a lot of resilience and hard work since none was realized within a year. It would take two to three years of nothing but hard work and perseverance. There isn’t a single project that he started and abandoned midway, once he commences he would struggle with it to the very end. “You may have talent and the ability to solve problems, but there is no support. There is an absence of raw materials needed to realize my dreams, no equipped facility for inventors like me and often, I have lacked moral and financial support,” he laments.

He is in a tertiary institution now as a third year student though surprisingly, isn’t pursuing a course related to engineering where his passion lies. “I am currently studying for a Bachelor’s Degree in Geology at the University of Sierra Leone. However, my wish is to get a scholarship and study a course that will enhance my talent in invention and innovation. I have received fake promises which often hurt and disappoint me because no tangible help has ever come my way since I began to hit the headlines. You will be shocked to learn that I have fee arrears of almost two years. It’s a really tough journey. I wish I could get international recognition or maybe donations to help me come up with a workshop and source for better materials,” he says. Indeed this is very disheartening.

Emmanuel hails from a poor family background and is in dire need of financial support for his projects. He says his dream is to make his contribution in developing Sierra Leone, as well as achieve a successful career in his field of passion. His aim is to address the seventh goal of the UN Sustainable Development Goals (SDGs), which advocates for affordable and clean energy for all. His message to the youth of Africa is that they should know they are the future of today, and not tomorrow, and it is their mandate to contribute towards the development of the continent.

In a world where climate change has become a global crisis, young people like Emmanuel are truly a blessing and one of a kind. 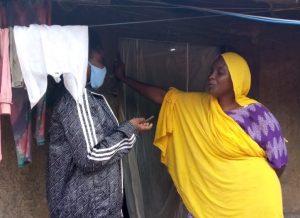 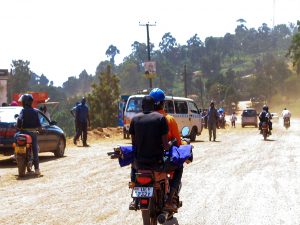 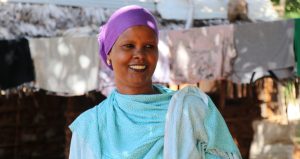