The epilepsy awareness champion pulling down the walls of stigma

When Fredrick Beuchi Boya learnt that his sister was suffering from epilepsy, he deplored the reality she would face since in his community it is associated with a curse. The love he had for her made him research more on the condition and now he is spreading awareness about epilepsy, not only in Kenya, but all over the globe through various drives.

Epilepsy is a chronic non-communicable disease of the brain that affects people of all ages. According to the World Health Organization (WHO), around 50 million people worldwide have epilepsy, making it one of the most common neurological diseases globally. Nearly 80% of people with epilepsy live in low and middle income countries. It is estimated that up to 70% of people living with epilepsy could live seizure free if properly diagnosed and treated.

However, there are so many myths and misconceptions that revolve around the disease which have led to exclusion and stigmatization of people living with it. It is one of the most dreaded disease as some associate it with witchcraft while others think it is contagious. Beuchi began fighting stigmatization as he sought to establish an accommodative environment for his sister and other people living with epilepsy. “I have handled countless cases, people I’ve had to go to their companies with, simply because they were being laid of for having a seizure at the work place. Epilepsy isn’t a barrier to physical achievement, neither is having a seizure a limitation to one’s ability to deliver,” he argued. He stressed on the need to defend the rights of persons living with epilepsy stating that, just like any other normal people, they can handle anything life throws at them. 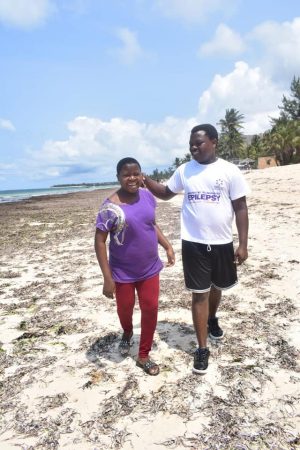 Fredrick and his sister along the beach in Mombasa

Fredrick Beuchi Boya, was born and raised in Mazeras, Kwale County in the Coastal part of Kenya. He traces his origin to Malawi since his grandfather was Malawian. The 31 year old is the first born in a family of five children. His last born sister’s condition forced him to take a different path in life. “My sister was diagnosed with epilepsy at the tender age of two. Her condition kept on worsening by the day since we were clueless on how best to take care of her. She would have seizures after every twenty minutes, her head was deformed and she had injuries all over,” he told me during our interview.

Having studied Shipping Management at the Mombasa Aviation College, Beuchi secured a job at Linear East Africa Shipping Agency where he worked for more than a year. Later, he was forced to quit his well-paying job in order to go assist his distressed mother take care of his younger sister who had just been diagnosed with epilepsy. Little did he know that this would change his career as he strived to be his sister’s knight in shining armour.

“It was in 2012 when I decided to quit my job and go home to help my mum take care of my sister. By then, the reality of her not being normal had really hit home. My mum was really getting depressed by the whole situation. I really tried looking for means and ways of helping my sister. There is this one day when I turned on the TV and saw an advertisement about the first ever epilepsy open day. It was being held in Nairobi and was organized by the National Epilepsy Coordination Committee. I had no idea whatsoever what to expect but I decided to go with the hopes of understanding the condition more. I travelled from Mombasa to Nairobi and stood in the long queue for hours. Lucky enough, I managed to see a doctor, Dr. Chengo, who coincidently was also from Mombasa. Moved by my sister’s story, he booked an appointment for her once he got back to his hospital the following week. After conducting a fresh diagnosis he was able to deduce that the cause of her epilepsy was cerebral malaria that she once suffered from,” narrated Beuchi extensively.

His sister began getting the right treatment from Dr. Chengo and as days went by, there were significant changes. “My sister’s epilepsy condition has been progressive. She has not experienced the general seizures where she falls down, jerking, and foam coming out of her mouth. Neither has she endured drop attacks where she suddenly drops and bangs her head, or getting absence seizures and being violent and unrestful. I have witnessed her walk through this painful journey with progressive changes to where she is right now, about five years seizure free,” he attested. In the process of caring for his sister, Beuchi came to understand epilepsy better and gained a deeper understanding of it that he began creating awareness. He even went back to college to pursue a course in Theology and Counselling to help him reach out to people and do epilepsy counselling.

It may sound like a cliché but experience is indeed the best teacher. Beuchi gained a lot of experience by caring for his sister since he had to do a lot of research. He mastered the art of normalizing his sister’s life by integrating her back to social life through organizing concerts for children and sensitizing the community about epilepsy. “My sister was not interacting with other children. So, I thought of taking her to an environment with lots of children just to try and build her social life. That is how the idea of having a concert was born. When I took her to that first festival, she was so jovial and I quickly learnt that the distraction she had there even reduced the seizures that she would experience in a day.” 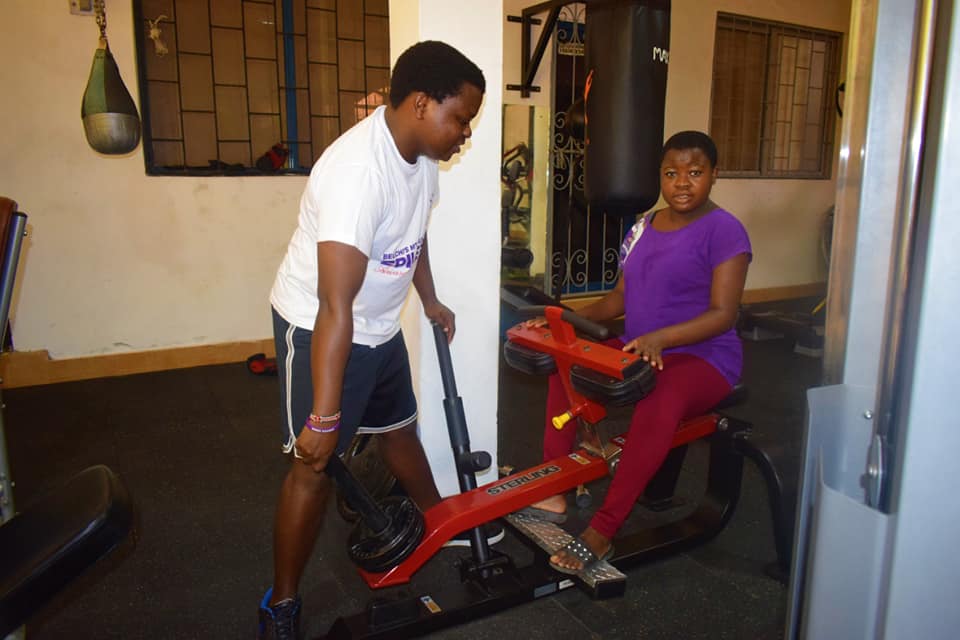 Fredrick and his sister in the gym

“It was such a great impact on her that I turned it to an annual kids’ festival, focusing on epilepsy awareness, and it still happens up to date,” he pointed out. All it takes is acceptance, care and the correct treatment because seizures can be controlled. Up to 70% of people living with epilepsy could become seizure free with the appropriate use of anti-seizure medicines.

Passion and dedication towards creating awareness and helping families and people living with epilepsy landed Beuchi at the National Epilepsy Coordination Committee as one of the board members. “As a board member of NECC, I realized that there was very little attention being given to epilepsy. I began having crazy ideas on how to bring epilepsy awareness to the limelight. There was an existing campaign dubbed ‘Angaza Kifafa’ Swahili for ‘Shine light on Epilepsy’. In 2018, I decided to publicize it through a walk from Nairobi to Mombasa in a bid to create awareness on the condition. I was flagged off in Nairobi and it took me around 12 days of trekking to get to Mombasa. In the first five days I covered an average of 40 to 45 kilometers but as days went by, I got weaker. I covered a total of 482 Kilometers and by the time I was done, I had really bad blisters on my feet. I had invited a couple of friends to join me but they thought it was a crazy idea so I ended up doing it alone.” According to Beuchi, that walk became the talk of town as he made many appearances in media houses just to talk about epilepsy. This was mission accomplished. 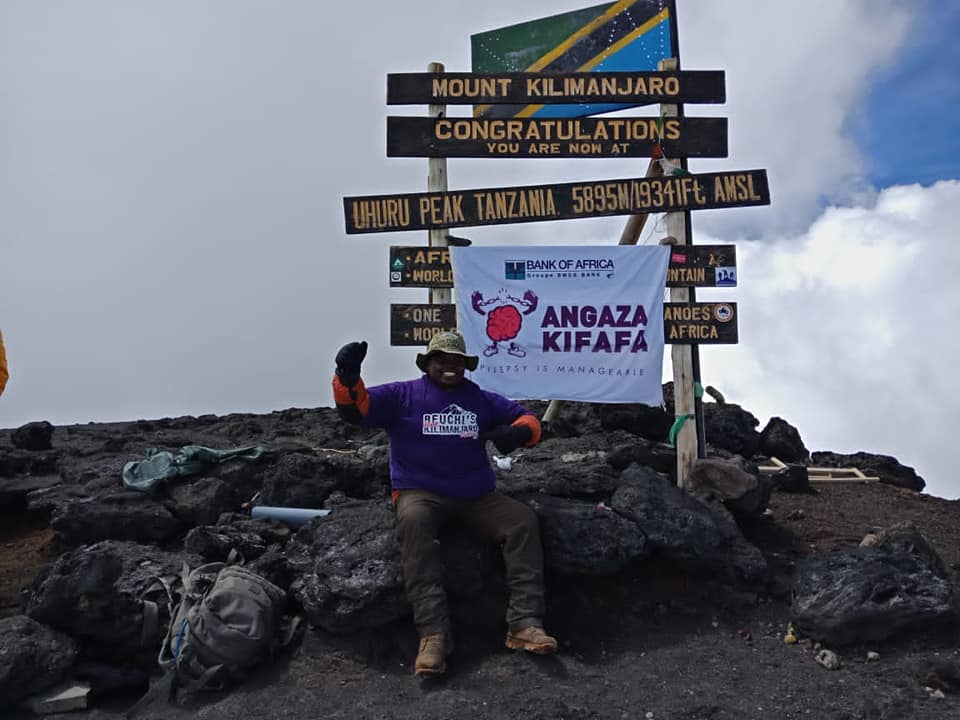 On top of the Kilimanjaro

Two years down the line, the excitement had already died down so he decided to have a comeback. Under the same campaign of shining light on epilepsy, he decided to do a hike challenge of climbing Mt. Kilimanjaro, Africa’s tallest mountain of about 5,895 meters (19,340 feet). As if this wasn’t enough, he combined the hike with cycling from Nairobi, Kenya to Arusha in Tanzania, all in a bid to create awareness on epilepsy. “The whole Mt. Kilimanjaro experience was scary. I had watched clips on YouTube on how icy it was and I couldn’t imagine that is what I was going to subject myself to. Walking for kilometers on ice and the high altitude was challenging and it got tougher as we got higher. We were a team of twenty people but out of those, only five made it to the peak. The resilience and passion kept me going and I was more than ready for any eventuality that would have come my way,” he indicated. According to him, this expedition’s goal was to create epilepsy awareness not only in Kenya but in Africa and he believes the message got home.

Plans for his next expedition are underway as he takes his epilepsy awareness global. Beuchi will be competing in the Boston Marathon in 2022, not for the gold, but to spread the gospel of epilepsy.

Immediately he got back from the hike, he was awarded by the Epilepsy Alliance Africa for his dedication in creating awareness about epilepsy in Africa. He confessed to me that this came as a surprise to him. It goes without saying that indeed good deeds never go unrewarded.

To add on to that, he has also been shortlisted for the Golden Light award by the International Bureau for Epilepsy (IBE), a global platform that advocates for epilepsy. He is looking forward to traveling to Paris to receive this prestigious award. “My parting shot won’t focus on epilepsy as a condition but as a great life lesson. It has enlightened me to appreciate other intellectual conditions revolving around mental health,” he concluded. 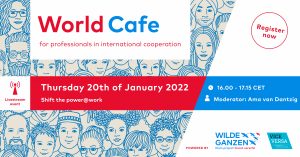