At Muyeye located on the outskirts of the coastal town of Malindi, I come across women working at a gravel quarry site. A quick headcount showed a total of 15 women, though they usually range from 30 to 40, some with their toddlers right inside the site. The norm here is toiling under the hot sun for 10 hours a day hammering rocks into smaller rocks, sieving and packaging them for a potential buyer. For each bag they fill with gravel, they earn around Ksh.20 to Ksh.50, which is way too little compared to the time and energy consumed. 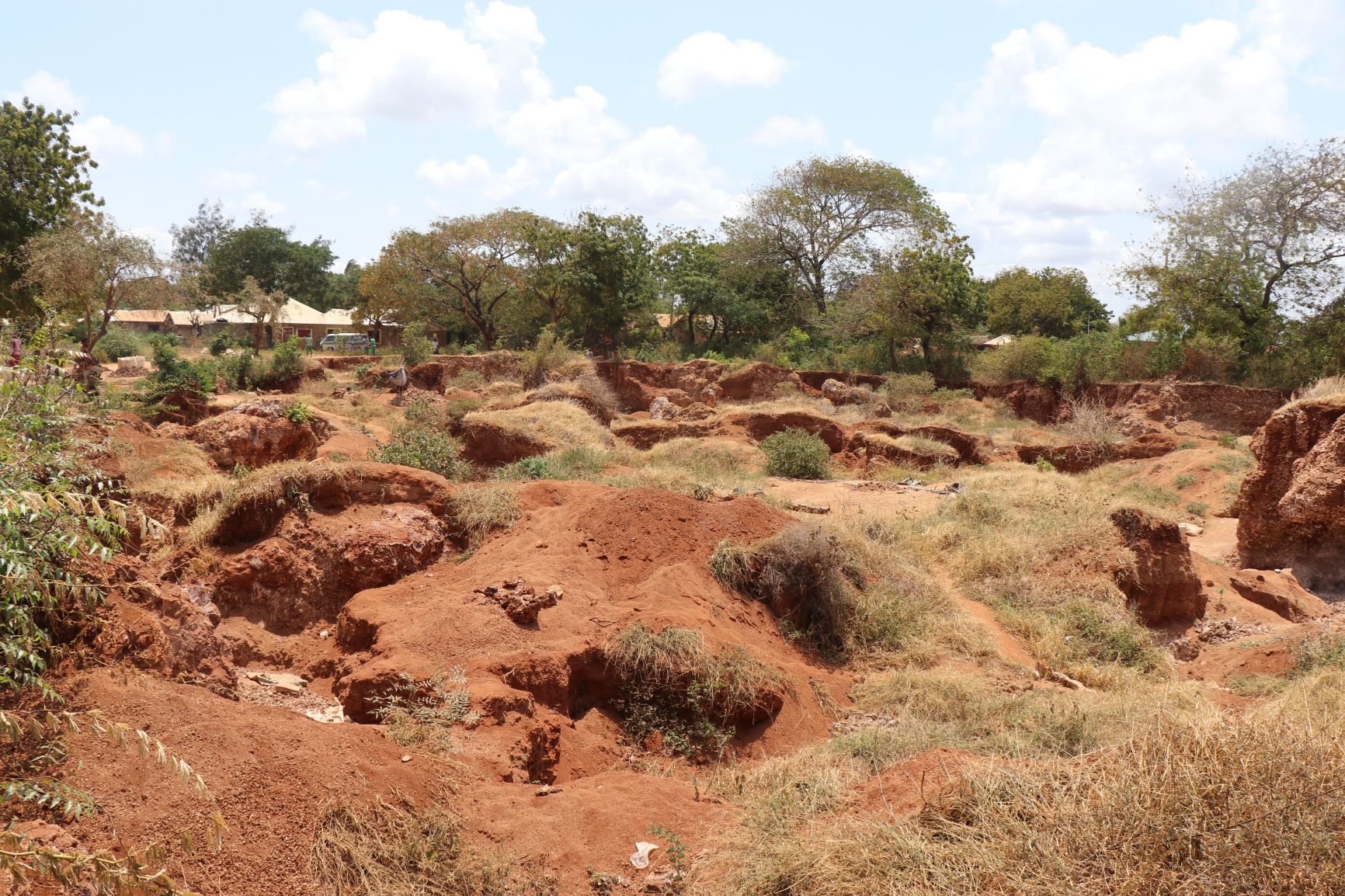 The labor exposes them to particulates that can cause lung damage and respiratory illnesses. It’s a back-breaking work but it is the only option they have left since all other opportunities, along with their hopes, have dried up. Subsistence farming and fishing used to be the residents’ primary means of survival. However in recent years harvests have been failing due to lack of adequate rain, with fish stocks also gradually dwindling, leaving many in need of food aid. I manage to speak to three of the women and here is their story.

She joined the quarry hustle three and a half years ago. Before that, she used to work as a house-help but the pay was not enough to cater for her expenses. “Before learning about this quarry I used to work as a house-help, but my salary was too little to sustain me and my four children. My first born dropped out in form two since I could no longer afford her fees, something that really broke my heart, so I decided to look for a better option. The Ksh.3000 I was getting as a house-help per month could barely take us through two weeks. When I started here, I was a bit skeptical at first but with time, I came to realize it is better than my previous job since here I’d get money on a weekly basis. It’s very difficult work I must say because it requires one to be here very early in the morning. I always leave my place, Sabasaba in Muyeye, by 6 am and by 7 am I’m here. I have managed to keep my other children in school and my prayer is that they finish school, get good jobs and hopefully get me out of here,” she narrates full of emotions. 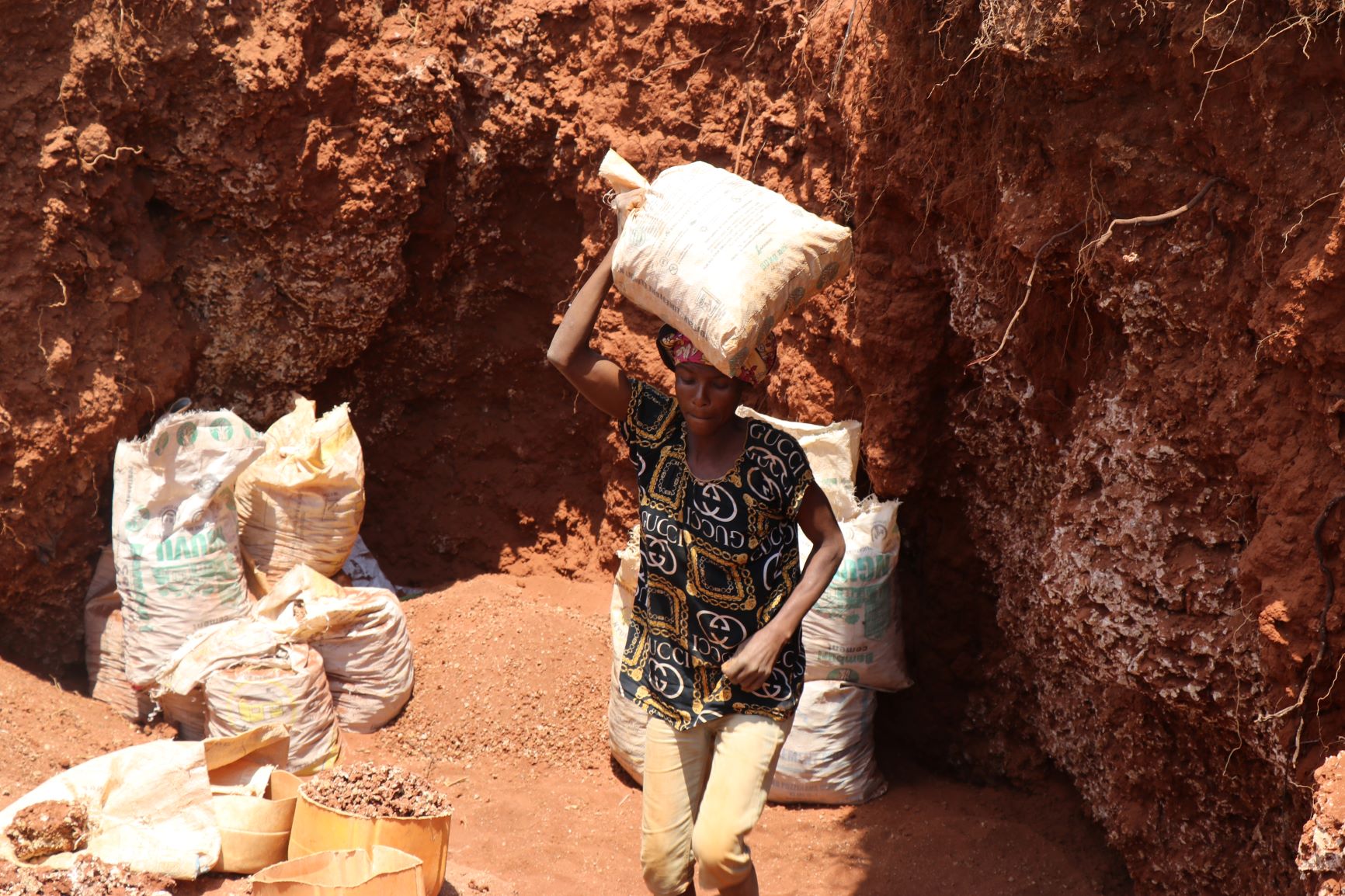 Halua Kazungu carrying a pack of gravel out of the site

The forty two year old mother of four however laments on the dangers and risks of the work. “My health is slowly deteriorating because of this work due to the fact that we work without any form of protective gear, with the heavy dust causing us chest problems. Personally speaking, I visit the hospital quite often and was even advised to look for another means of survival. But when you look around there is completely nothing that you can do, so I’m always forced to come back here because no matter how little it is, at least I know my children will not go hungry,” she explains. Halua also points out on how difficult breaking the stones actually is, leading to her consistent backaches. Her wish is to get a better job or hustle, preferably a small hotel for a startup, since this is what she is passionate about. Her dream is to one day get out of this ‘death trap’ as she called it.

From her appearance, I estimated she could be in her late sixties, even though I couldn’t ascertain it since she doesn’t know her age. “My daughter, I never went to school. I do not know how to read neither do I know how old I am,” she begins. She tells me the only way I can know her age is by checking her identification card (I.D) which unfortunately she doesn’t have on her at this time. “God never blessed me with children and after my husband passed on, I chose to come back to my parents’ home. I am an only child and therefore, I have no one to take care of me. I tried farming but crops dried up due to lack of rain so I resolved to join the women here in the quarry to at least fend for myself. It is very difficult work, especially for me as an old woman, and the pay is very little but it is all I can rely on lest I die of hunger,” she tells me. 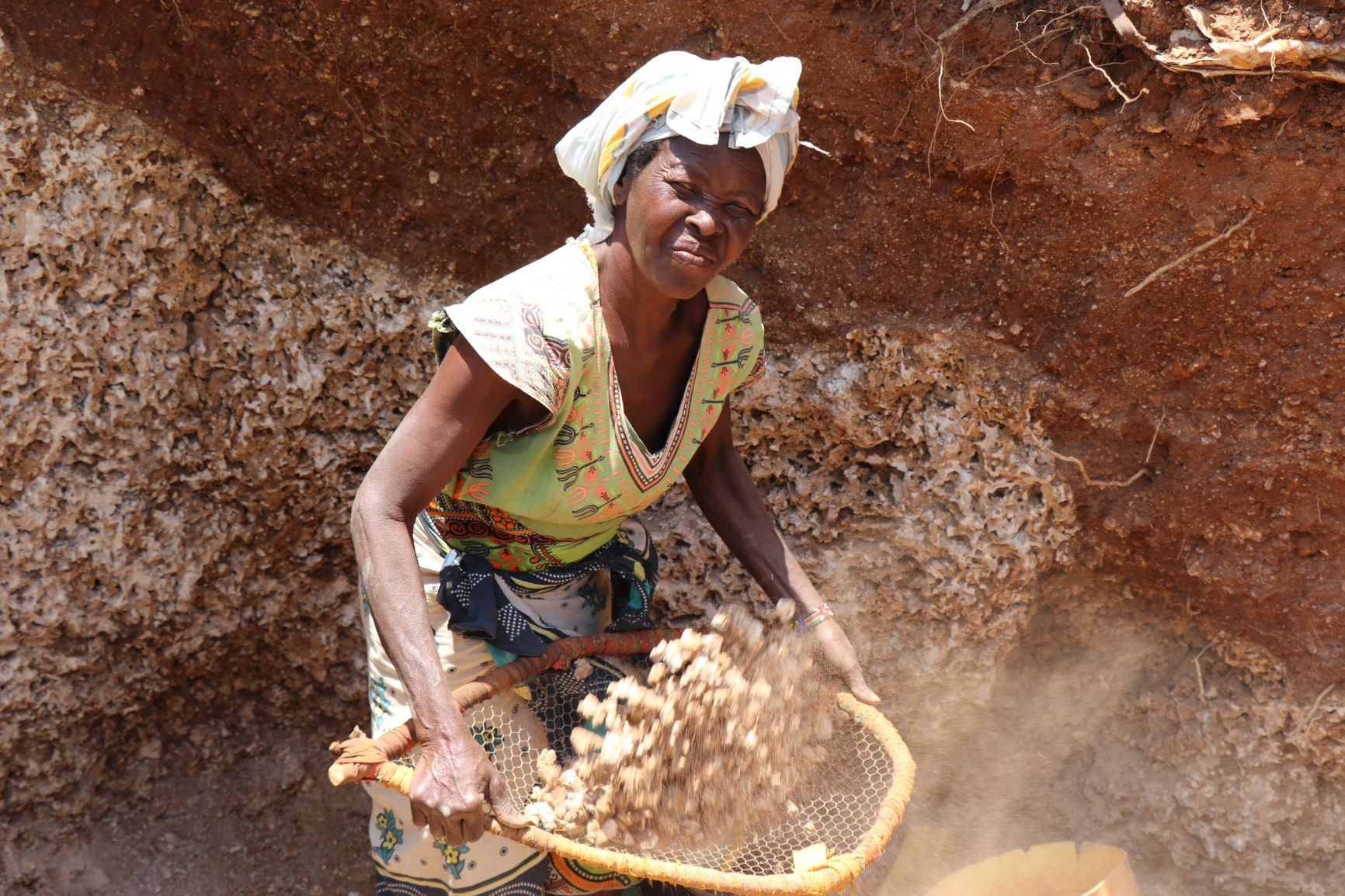 Elizabeth has developed chest problems that has made her to rely on drugs on a daily basis, which she carries with her even to the site. She is thankful that she is able to put food on the table and even assist a few of her nieces and nephews, through her cousins, to keep their children in school. “In today’s era, people strive to be independent, that is why I equally decided to take care of myself and save my own soul from anguish,” she concluded.

Resting under a tree away from the scotching sun and exhausted, I meet up with Mercy. A forty nine year old mother of eight. At this particular time, she has already hammered five packs of the gravel, which she estimates to be around ksh.250 if she sells at the normal price. Sadly she has not received any buyer yet and it looks like on this day she will be going back home empty handed. She has worked at this very site for as long as she can remember. “Relying on a monthly salary was tough for me. What would my children eat before end month? When one receives their salary, which is normally way too little, it’s usually depleted even before the month ends. This has been my work for years, and this is how I manage to keep my family going, buy food, clothing, housing, school, you name it. School specifically has been my main reason to be here because my desire is to see my children educated, even if it is just the basic primary education,” she tells me. 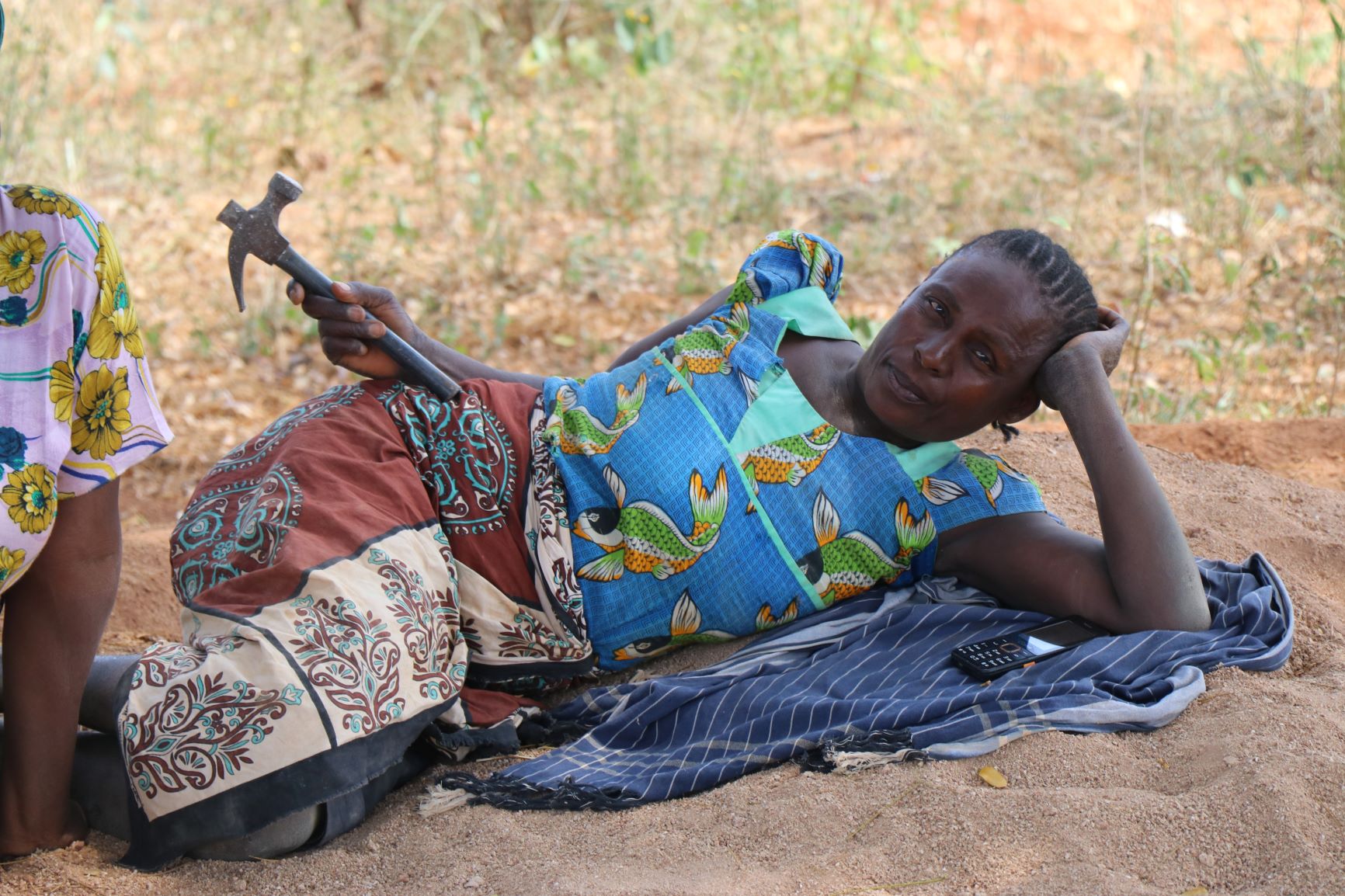 Mercy Katana resting after crushing stones under the hot sun

Mercy equally laments on how strenuous the work is, yet the buyers take advantage of their vulnerability and will always bargain so as to buy the gravel at a throw away price. “Many a times the buyers insist on buying at an extremely low price because they know we do not have other options and we are desperate for the money. Which is true, we are, and when I think of my children and their welfare, I’m forced to sell it at a loss, as long as I will get a few shillings to cater to my basic needs.” She recalls some of the fatal incidents that have occurred at that specific site. “I have witnessed three deaths ever since I started working here, but there is a specific one that I will never forget. A woman with her two children were buried alive when the walls of the pit caved in as she dug deep for gravel. Tensions ran high after and at some point I felt like we would be banned from coming here. Actually, of late we have been having people from the municipal council questioning us, to a point where we were chased. But we do not have alternatives, I can’t stand seeing my children go hungry and that is why I keep on coming back here,” she disclosed to me.

This deadly occupation is already arduous and complex, so to top it up with no special equipment or protective gear, is courting disaster. Sadly this same narrative plays out in different parts of the country where quarries are found. It’s high time that the government stepped in and sort this mess out once and for all by directing how mining activities should be conducted and the precautions to be taken. For women like Halua, Sidi and Katana, they should be assisted by either the national or county government to acquire the necessary tools and safety gears needed to work in such environments since they have no other source of livelihood.

The President of the Republic of Kenya H.E Uhuru Kenyatta just declared drought a national disaster. Many parts of the country have been hit hard, including coastal Kenya. The mining that is happening at Muyeye, among numerous others globally, are one of the major causes of the climate change that is being witnessed lately across the globe. If nothing is done to such mines, where environmental degradation is happening, then the effects of climate change are bound to worsen. 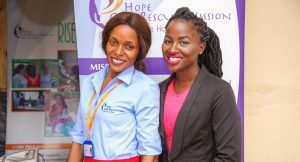 Today on the Upclose with Eva Nakato, we bring you the story of Linetti Kirungi Ruboha who underwent several surgeries after a fatal acid attack by an obsessed ex-lover, after which she founded Hope Care Rescue Mission, an organisation that supports victims and survivors of acid attacks. 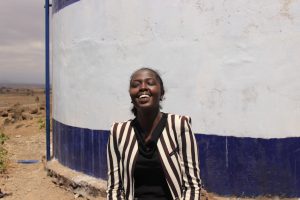 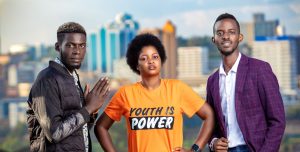 Being heard: the voice of a generation is getting through

Now, more than ever, young Africans deserve a place at the policymaking table, say Amref’s youth expert Evalin Karijo and diplomat Tijmen Rooseboom in a joint plea. They discuss ‘tokenism’, contraception and what real youth participation involves. But they have hope. ‘I’m actually very heartened by what I see.’